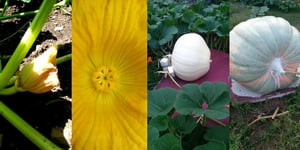 Do you remember the feeling you had on the afternoon of Halloween as a kid? You waited anxiously in your costume, gripping the handle of an empty bag, staring at the bottom, and anticipating the sugary treasures to fill it by the end of the night. (Hopefully you got more than a rock like poor Charlie Brown.)

We get a similar feeling when a BigYellowBag — albeit full of Soil3 compost —embarks on its journey to your neighborhood. We never know the bounty that awaits you once you encounter the bottom of the bag. Will you empty it growing flowers, topdressing your lawn, or producing some goodies for your table?  It’s always a pleasant surprise to discover the fruits (and vegetables) of your labor when you share pictures with us.

Imagine our delight when Adele Zuerner posted a progression of excellent giant pumpkin growing photos on our Soil3 Facebook page - from preparing the ground to a flourishing giant pumpkin!

We loved the story so much that we asked to share it on the blog. Photos and captions are all courtesty of Adele Zuerner. 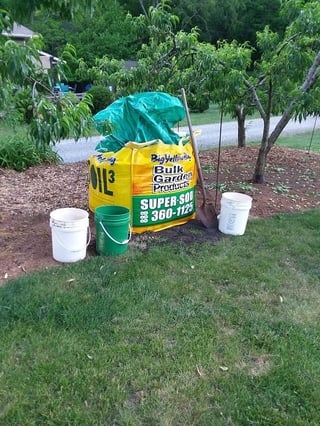 "As a giant pumpkin grower soil health is everything. This spring I tried the Soil3 compost humus to start my plants in and the results have been impressive. The pictures that follow are a progression of prepping the ground to finally seeing the plants produce giant pumpkins."

"Wide and deep planting holes with Soil3 were prepared after plowing and tilling." 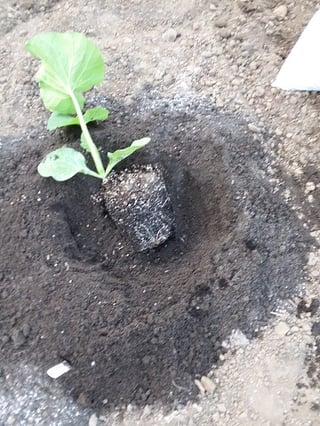 "Aggressive and massive root systems make these plants go. It's very important to have high-quality soil for the roots to move through easily. Here in Western NC, the clay soil can be an impediment Soil3 helps amend that problem." 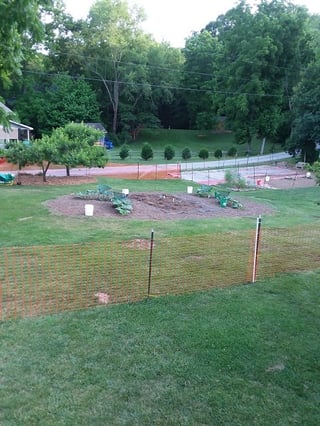 "By early June the plants are down and running." 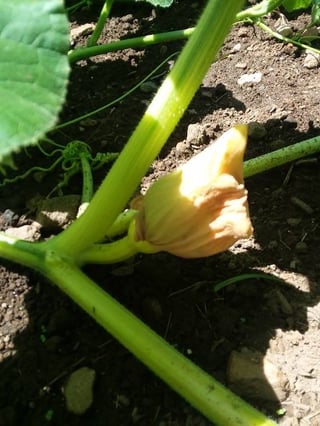 By the third week in June the pollinations have begun! This baby pumpkin was pollinated by hand and the stocking is to keep unwanted pollen out of the flower." 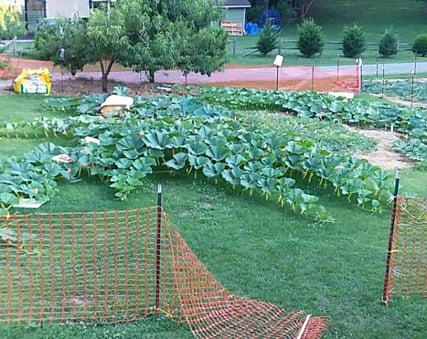 "Mid-July and everything is rapidly growing. The plants have spread out; the pumpkins can grow 20 to 60 pounds in a day. They had a good start with the Soil3. Wish I had a dump truck load of this stuff!" 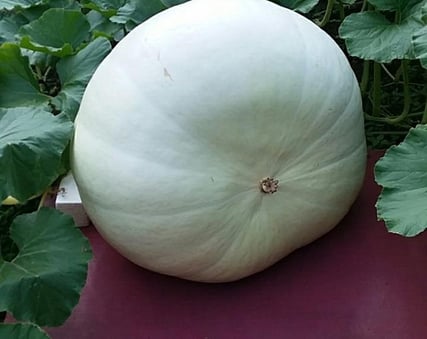 "This pumpkin is about 26 days post-pollination and already weighs over 300 pounds. They can grow for about 100 to 110 days, but the first 70 days bring the bulk of the growth. World record for a giant pumpkin stands at 2,624.5 pounds." 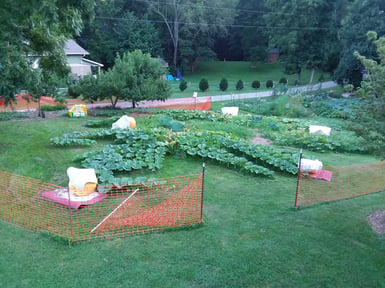 "It's been said growing giant pumpkins is a sprint in the beginning and a marathon after pollinations have set — a sprint to get the plants big enough to grow and push a giant pumpkin, and a marathon after pollinations for the 70-to-100-day timeframe for the pumpkin to fully mature. Post-pollination is the time to feed the soil and the plant, to keep diseases and insects at bay. I regularly use compost tea to feed the beneficial bacteria and mycorrhizae in the soil. Healthy dirt lends itself to a healthy plant."

"Giant pumpkins have many fascinating aspects. This particular photo of a pumpkin blossom over the baby pumpkin shows 6 segmented 'lobes.' This is where the bees would hang out transferring pollen from a male flower to this female flower. The lobes have tiny structures called pollen tubes that allow for the male pollen to be whisked down to the ovary inside the pumpkin. Each 'lobe' represents an internal ovary within the baby pumpkin.

"Each ovary can produce dozens, if not a hundred pumpkin seeds. Each pumpkin seed is the result of one grain of pollen fertilization. Pumpkin growers like to see multiple lobes on a female flower. It's thought that the more ovaries inside of the pumpkin the denser (heavier) it will be. Giant pumpkins typically have 3 to 5 lobes, but 6-and-7-lobe flowers occasionally come up.

"This pumpkin pollination did not set. Blossoms are slightly sweet smelling and I'm told are pretty tasty when fried." 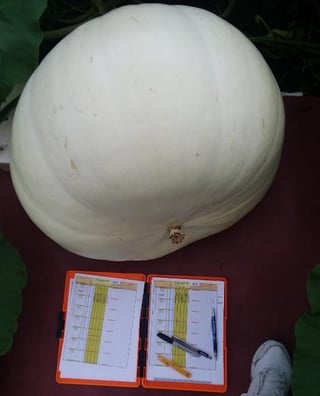 "Young pumpkins are followed closely. Measurements can track their growth rate and often indicate problems before you might notice them. This particular pumpkin had some challenges but is destined to go to the NC State Fair for display if it makes it." 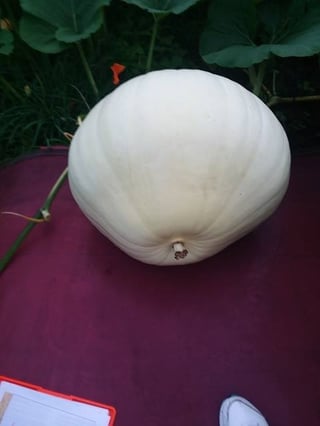 "Another nice young pumpkin. Their early shape often is indicative of how the mature pumpkin will look, but it's not a hard-and-fast rule. The giants change constantly through their growing phase, not only in size and shape but color as well. This pumpkin was off a plant called the '1944 Connally.'"

"Side view of the 1944 Connally. Care is taken to get the pumpkins off the bare ground. My method of doing this is to use a 2 inch piece of styrofoam and a porous mat called 'mill fabric' to give the pumpkin a nice dry platform to grow on. Sand will work fine if it's thick enough to drain well. Bare plywood is not so good since the pumpkin as it grows can push into the wood and break its skin surface, which allows bacteria to generate rot. Picking up a pumpkin with a rotting bottom is not a fun experience." 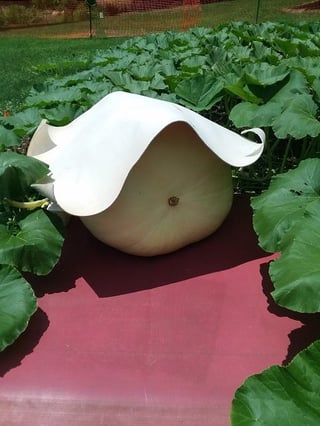 "Young pumpkins are shaded. Just like a small baby, their skin is very tender. The sun can 'harden' off a pumpkin skin and make peak growth events (like 3 inches of rain in a day) prone to splits. Many a grower has lost a pumpkin to a split, so much so that pumpkin growers often refer to the loss of a split pumpkin with the self-serving mantra, 'Well if you're not blowing them, you're not growing them!'

"We push the plants and the pumpkins as hard as we can, but there is a fine line between pumpkin glory and a mass of stinky rotting failure. Sometimes you are not sure where the line is, but not trying isn't in the make up of most giant pumpkin growers. We tend to be a competitive lot with the goal of taking a pumpkin to a weigh-off and taking home the top prize!"

"1944 Connally now some 60 days old. The pumpkin is starting to get a hint of orange on the blossom end but will never be a bright orange. More color changes will occur as time goes on." 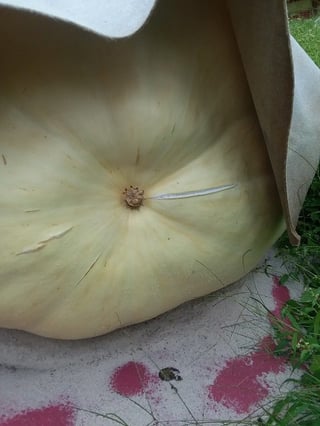 "Growth splits on the 1965 Brandt. These splits are usually due to a large amount of rain, if not protected with fungicide (painted in the split) rot can set in. Daily inspection of the giants is needed to ward off problems. Pumpkin is still covered at 65 days post pollination." 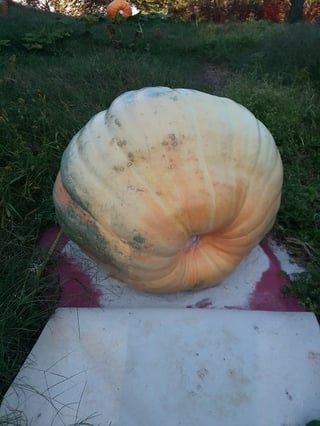 "1944 Connally just before harvest. It's now the third week of September and the pumpkin plant is pretty much done. The pumpkin has taken on orange and green hues along with its natural cream color. This pumpkin will be taken to a weigh-off event at the Yadkin Valley Pumpkin Festival. I estimate the pumpkin to weigh about 500 pounds but won't know for sure until it hits the scales."

"Stem end of the 1944 Connally, here showing much more of the green coloring from what was probably a squash ancestor." 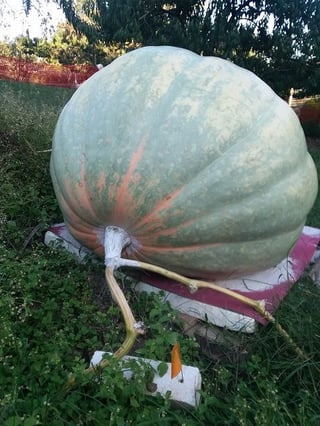 "Stem side of the 1965 Brandt pumpkin. While it's still barely growing it, too, has presented a mature shade of green, orange, and cream. This pumpkin is estimated to be a little over 700 pounds." 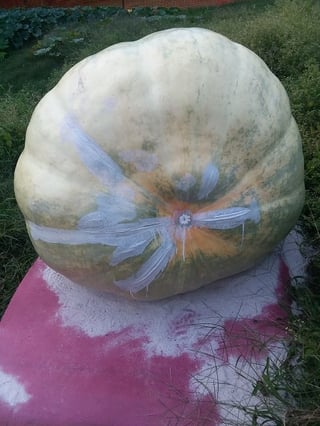 "Blossom end of the 1965 Brandt. Splits have grown, healed over, and new splits opened up. Overall this will be the biggest one out of the patch. Some growers give their pumpkins names, but I don't. I refer to them by their mother seed. The 1965 Brandt was a 1,965-pound pumpkin that was grown by a fellow whose last name is Brandt. When I officially weigh this pumpkin in a competition it will take on the official weight and my last name as its name." 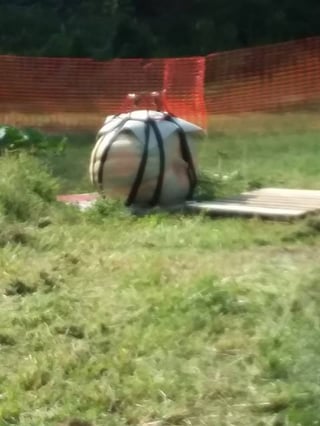 "Time to load a pumpkin! I have a special harness that allows the pumpkin to be loaded by picking it up with straps that support the pumpkin from the bottom. A tractor with a front end loader or a forklift can easily pick a giant up. Some growers also use a tripod with a come along to pick the pumpkin up. Hand loading is not recommended. Once picked up most growers will put their pumpkin on foam or styrofoam-covered pallet for transport."

"Loaded and ready to go to Elkin, North Carolina, for the Yadkin Valley Pumpkin Festival." 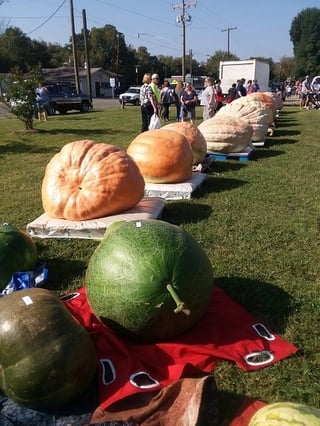 "Giants come in from all over the South for the weigh-off. Top prize can be $1,000 or more. While I've never won 1st place I've made a lot of great friends in the hobby. Every weigh-off is like a reunion with great friends, reliving the seasons battles and exchanging ideas and lessons learned in the ever-increasing chase to grow them bigger."

"My 1944 Connally waiting to be weighed and being looked at by festival-goers."

"Growers are interviewed by the M.C. as their fruits are weighed. Here a friend of mine is being interviewed by the M.C. just before the weight of his giant watermelon is revealed. Watermelons are very much part of the giant growing world, and this melon weighed in at some 260 pounds. It was about 90 pounds below the world record of 350.5 pounds for a giant watermelon."

"Here is a giant being moved to the scales for weighing. This shows the lifting harness a little better." 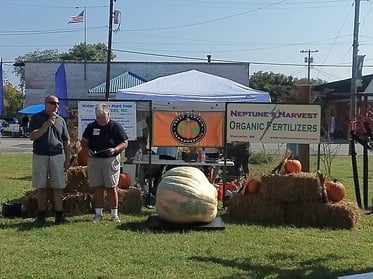 "My turn to be interviewed as the 1944 Connally pumpkin is weighed." 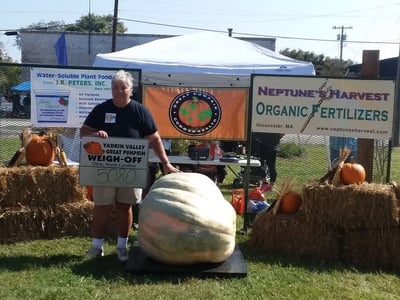 "Final weight on the 1944 Connally is 508 pounds. A very respectable weight for a small giant." 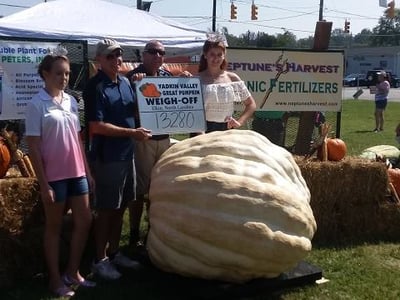 "The winners of Elkin's Yadkin Valley Pumpkin Festival weigh-off had a pumpkin weighing 1,328 pounds. It was one of the biggest grown in the South this year, but far below the world record of 2,624.5 pounds grown in Belgium last year. Our native heat helps drive soil diseases and insect pressure. That's why it's so important to have great well-draining soil. I found that Soil3 certainly fits the bill in that regard." 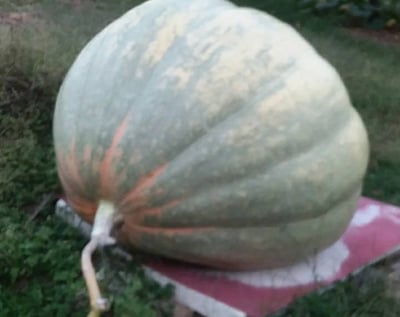 "One more to weigh at the NC STATE fair on October 12 if all goes well. I'm hoping the 1965 Brandt will be heavier than it looks."

"If you are interested in growing some of the giants, take a look at BigPumpkins.com. It's a family friendly web site that will give you tons of information, and everyone there will try their best to give you good information or put you in contact with a local grower who can help you with your local conditions.

"As a disclaimer I have no financial interest in BigPumpkins.com, nor am I compensated in any way to mention them. It is simply THE place where the giant growers hang out, exchange information, and keep up with what's happening in the giant world.

"Thank you to Soil3 for allowing my to share my hobby with you through their website. I think they've got a great product."

Have questions? Comment below with everything you've ever wanted to know about growing your own giant pumpkins.

Adele cultivates these monster pumpkins each year and enters them in various competitions. During spring 2017, she entered our drawing at the Mother Earth News Fair in North Carolina and was the lucky winner of the cubic yard BigYellowBag of Soil3 organic compost. Adele used her prize to help grow her prized pumpkins. 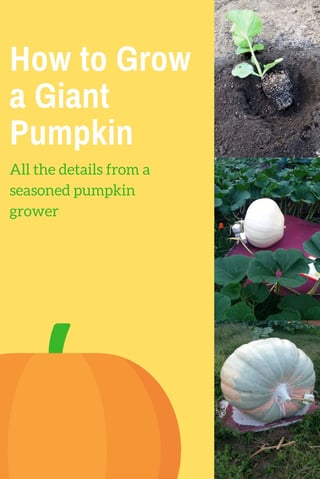