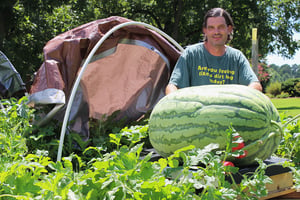 A giant watermelon grower since 2010, Todd has seen melons break state and world records, but the 2018 growing season has exposed an all new aspect to his hobby.

“This year I decided to grow a couple of melons on scales,” Todd explains. “But I think watching the weight will just about drive you crazy.”

For giant growers, the weight is everything.

Todd guides me over to the first melon, covered with a gray-and-brown tarp and proudly displaying its weight on a digital scale. An impressive set-up, as the scale is exposed to the elements, this watermelon is growing slowly but steadily at 197.8 pounds. 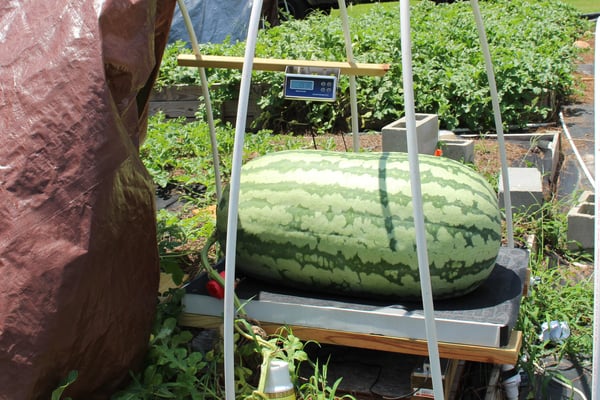 However, the real wonder is inside the towering greenhouse. He opens the door to the sound of fans whirring and I glance to the right to see the monstrous melon also covered by a tarp and perched atop its own scale. This one is larger and has seen the most care of any melon in all of Todd’s garden. 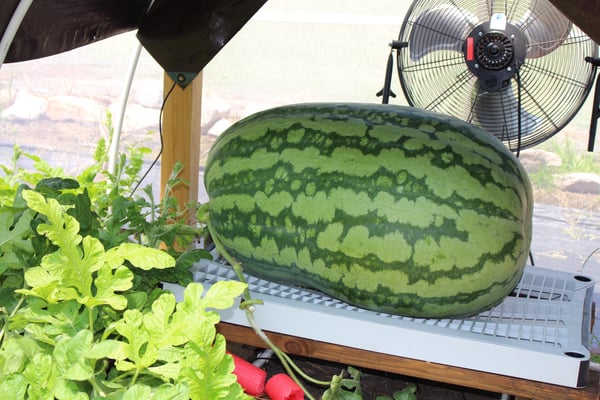 (See the full set-up in a video further down this post.)

It Starts with a Seed 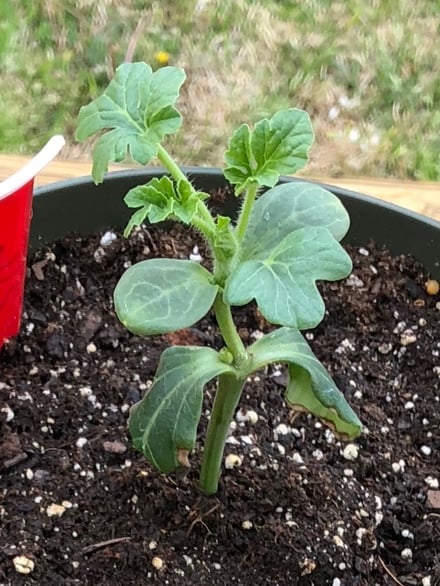 He started the growing season by seeding his watermelons indoors during March.

“Bless my wife. I had taken over the entire dining room table with watermelon seedlings for a few weeks,” he recounts.

Todd transferred the plants to his garden plots at the beginning of May and began his eighth season of cultivating these garden giants. He hand-pollinated the melons to direct them on the correct vine and watched them begin to work their magic.

From that point, he persisted using slightly different methods from years past.

While growing on a scale is a new venture, Todd also changed up his routine by incorporating a new soil element into his melon patches this year – Soil3 organic compost.

Mixing in the Soil

Todd’s soil mix is typically composed of leaf mulch and his own native soil, but he added Soil3 to some beds this year and even planted one plot with nothing but the organic humus compost as a growing medium.

“It think [Soil3] drains well. I was impressed with the drainage considering the amount of rain we got,” Todd speaks of his all-Soil3 bed. “When you’re growing these things, you want something that drains. After 3.5 inches of rain, it’s still fluffy.”

He lifts the plastic that separates the vines from the soil, scoops up a handful of Soil3, and lets the loose compost run through his fingers.

Todd monitors his melons according to weather and weight each day and gives us a little insight into what makes giant watermelons succeed beyond the soil.

“Perfect watermelon growing weather is sunny with one-quarter inch of rain a week, no clouds, and 95 degrees,” Todd explains. “It’s actually easier to grow in a drought because you can control the rain.”

He’s always innovating to adjust to the challenges of growing Giant Melons. While it's his first time growing on a scale and with Soil3, 2018 also marks his first year growing in a greenhouse, and he already has adjustments swirling in his mind.

In a completely separate bed, Todd is experimenting with a patch of African melons to cross with other varieties in years to come. This bed has no soil amendments or extra water, and Todd has no clue when they’ll be ripe - but they seem to be doing well!

With all his experimental techniques, Todd hopes for a competitive melon at the 2018 weigh-offs. He typically chooses a melon to weigh in at Knoxville and Elkin events, while he saves the best melon for the North Carolina State Fair in Raleigh at the beginning of October.

In years past he’s seen melons break records and come home with blue ribbons. One giant watermelon even brought him to New York City where he showed of a champion melon on “LIVE with Ryan and Kelly”! 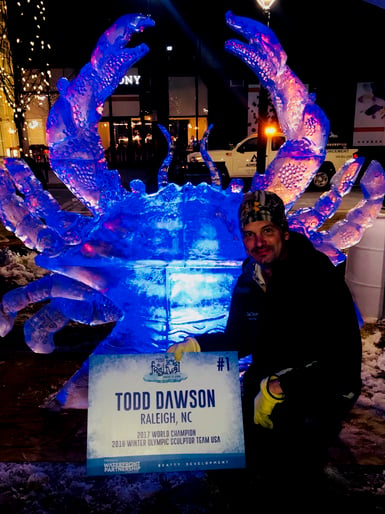 His competitive spirit and agricultural hobby have taken him across the country, but Todd’s day job is not to be ignored. Todd is a professional ice carver and owner of his own business, Ice Occasions.

I couldn’t help but ask about his intriguing profession. After receiving a degree in agriculture, Todd was working in the landscaping business when his family decided to invest in some molds for making ice sculptures. Over the years, he ventured into the realm of carving custom sculptures instead of just molding them.

A new passion was born, and he’s traveled to ice carving championships around the world and was named the world champion ice carver in 2017 at his favorite competition in Fairbanks, Alaska.

With all that ice every day, it’s no wonder he loves growing watermelons in the hot summer sun.

Todd lives with his wife and children in Garner, North Carolina, and agreed to grow his watermelons using 10 cubic yards of Soil3 organic compost this year. Thank you, Todd, for inviting us to be part of your 2018 giant growing journey! 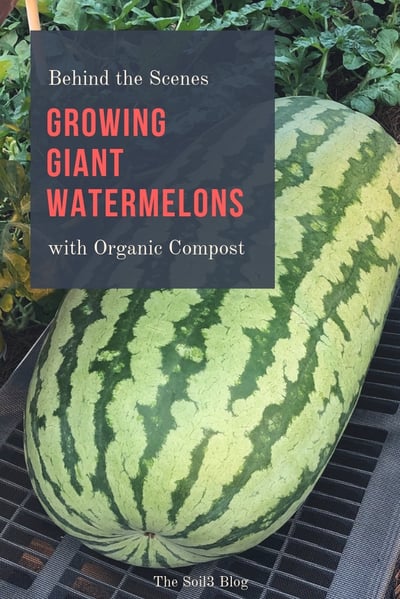 What Is Humus Compost?

by Allison Fortner with Hillary Thompson