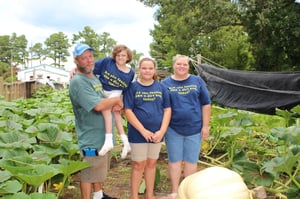 For the Lovitt family, growing pumpkins is a hobby shared from the oldest to the youngest of the bunch. Gary and his children, TJ and Marina, grow pumpkins together each year, while his wife Emily prefers to create displays with the pumpkins once they’ve reached their full potential. 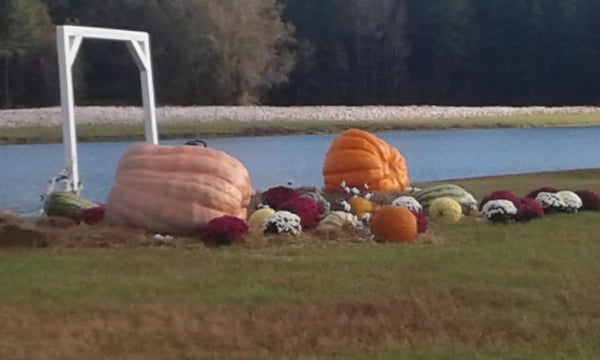 When Gary and Emily got married in 2017, their wedding decorations were fruits grown by their family and others in the giant growing community.

In the giant pumpkin growing community, they grow for size or for beauty. This family dabbles in a little bit of both. 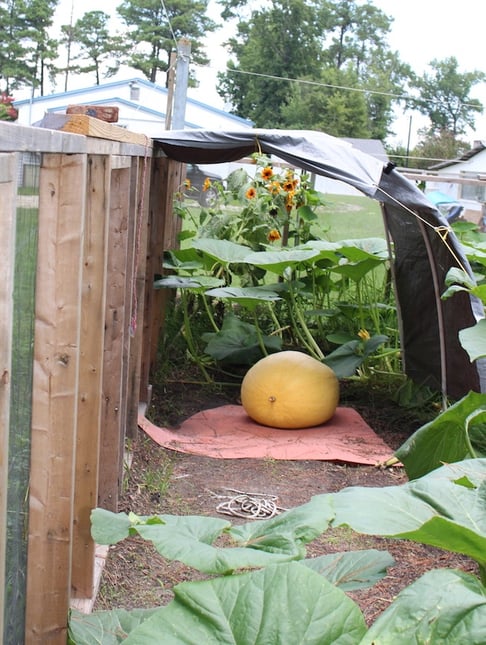 An orange pumpkin rests beneath the tarp in hopes of growing to giant status.

Giants we’ve seen in previous blog posts about Danny Vester and Adele Zuerner have been all about the weight of the pumpkin. The larger the pumpkin and the heavier, the more competitive. TJ Lovitt is all about the big pumpkins and aspires to grow the largest ones.

However, some folks grow their pumpkins for looks. Gary loves the look of a classic, orange pumpkin and has passed that passion on to his daughter Marina. They choose seeds at the beginning of each season from prize-winning pumpkins from other growers in hopes that their plants will result in similar gorgeous fruit.

Each plant begins indoors in the spring, and then 3-4 of the best plants are selected to go into the patch. This is with the hopes that just one giant pumpkin will make it to the state fair weigh-off in October. 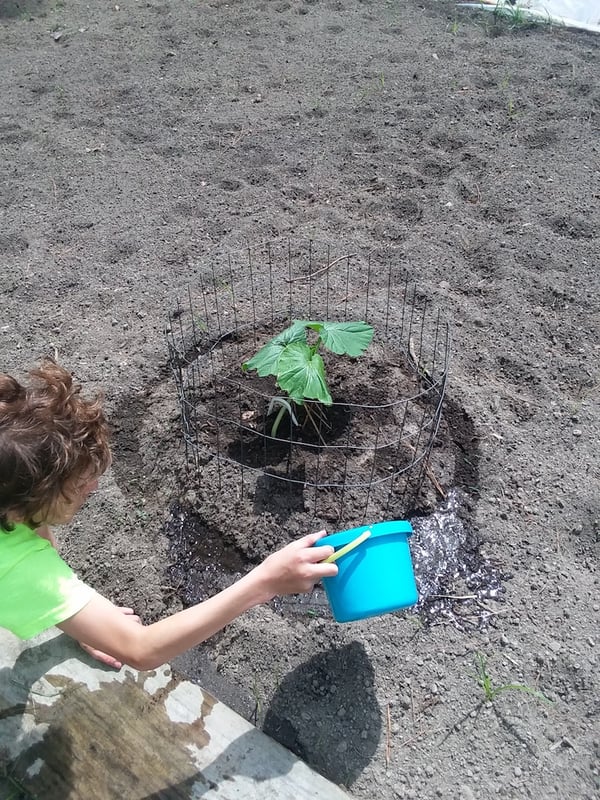 TJ helps the young pumpkin plant get off to a good start during the early days of June.

After the plants are put into the ground, you wait for them to flower and hand pollinate them to make sure the plants are bred with the absolute best genetics. While they love pollinators, they don’t want anything but the specifically chosen pollen from the male flower to reach the female flower. Because of this, Gary carefully ties up each female flower to prevent bees from affecting the hand-pollination methods. 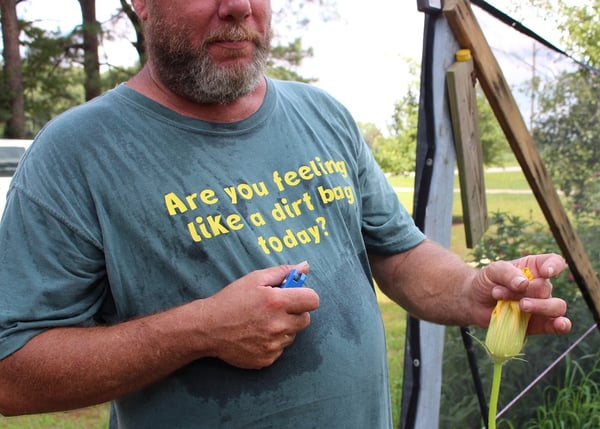 In 2018, TJ’s pumpkin, grown in a bed covered with 6 cubic yards of Soil3 humus compost, was already 200 pounds only 24 days after pollination. In order to control the growth and keep pumpkins looking great, once the vine begins to produce fruit, they place it on top of mill fabric (typically used on conveyor belts) to allow water to drain and stop pesky critters. Then, a layer of sand separates the pumpkin and the mill fabric. The sand allows the pumpkin to slide as it grows without creating too much friction. 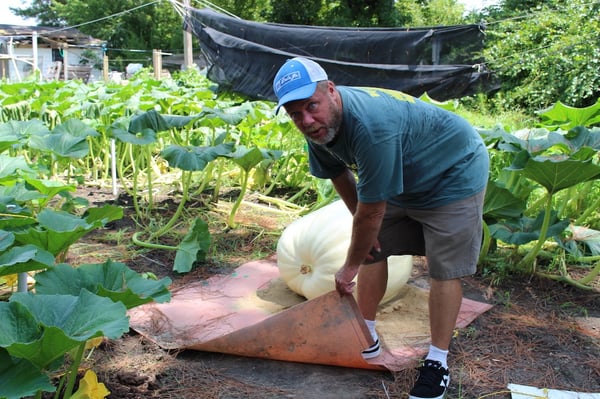 Gary demonstrates how the mill fabric helps with drainage and pest prevention in the pumpkin patch.

Once they spy the big pumpkin that they want to succeed, other contenders are cut off the vine or “culled.” You want the plant to focus all of its energy on one vine. That energy will result in quick growth of the fruit.

Once the fruit begins to get larger, the Lovitt clan covers it with a T-shirt so that the skin doesn’t crack. Just like human skin, the pumpkin’s covering is sensitive to sunlight and needs to be shielded. This makes it easier for the skin to keep up with the growth of the walls, and a dome-like shelter eventually covers the pumpkin to give it even more protection.

While growing, strategic doses of nitrogen, potassium, and plenty of water are all necessary to keep the pumpkin healthy. Gary estimates 100 gallons per day go toward promoting giant pumpkin growth! 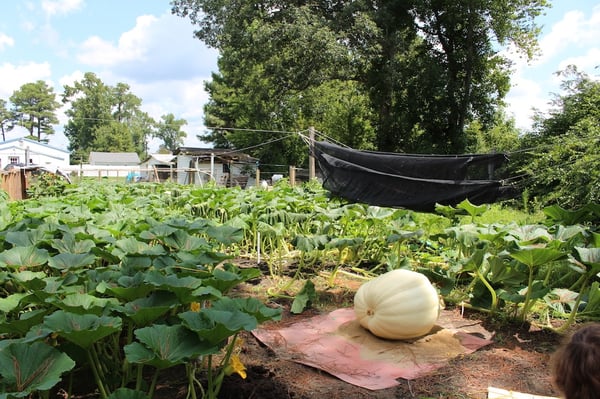 24 days after pollination, the 1826 Wolf plant is thriving.

While the fruit itself is important, vine health is equally crucial. They must clear out bad vines but also stake them to ensure they’re running in the right direction and don’t overtake the area where the biggest pumpkin is growing.

After day 60 of growth, the pumpkin stops gaining weight as rapidly.

“You want 103 days of total growth to make it to the fair,” Gary explains.

The Lovitt crew grew with Soil3 for the first time this year. They applied six cubic yards of Soil3 compost to a 1,000 square-foot bed and planted TJ’s 1826 Wolf – the most hopeful plant for the year.

“It does seem to have a good amount of nutrient value to it,” says Gary. “I’ve not had to add nearly as much as I do on a normal year. As you can see, it’s plenty green.” 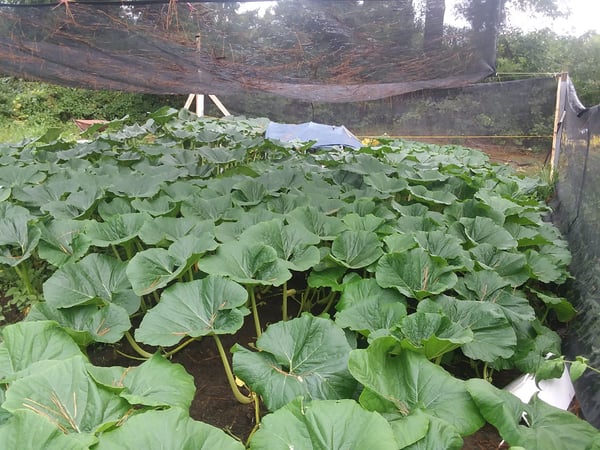 Early August saw a canopy of leaves popping up from the vines of the Lovitt pumpkin patch.

When we visited the patch on August 5, the canopy of leaves stretched from one side to the other, covering the entire bed and making it impossible to navigate between the vines.

“The root growth on the Soil3 is way beyond anything I’ve seen on any of my other soil. It really makes the roots just run!”

All About the Kids

While the daily dedication and ever-evolving learning experience is an enjoyable hobby, it’s really all about the kids.

Gary started growing giant pumpkins because he saw and advertisement at a store depicting a father and his son with a pumpkin – the son was right around TJ’s age at the time. This inspired Gary to begin growing, and the tradition has continued for the past 8 years.

Since then, TJ has been crowned the weigh-off junior champion three times, while Marina has been awarded the prestigious Howard Dill award for the most beautiful and best-all-around pumpkin at two weigh-offs. 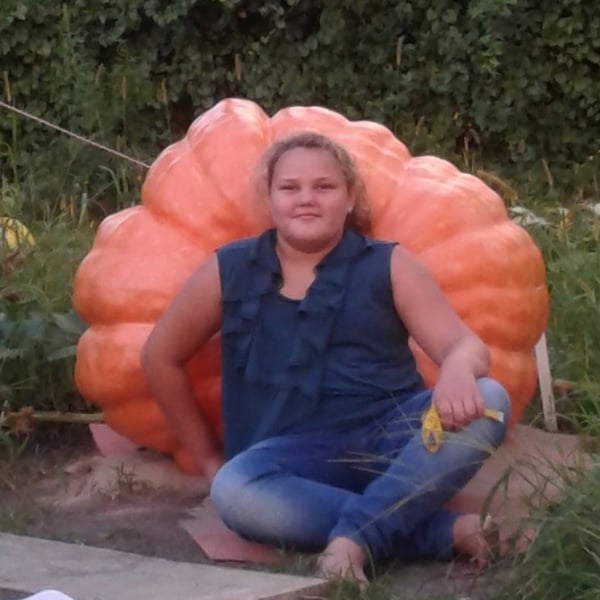 Though the Lovitt kids love the pumpkins, they enjoy sharing their passion with others.

“My favorite part is when the kids from school come out to the patch and get to see the big pumpkins. There’s nothing like it,” Gary says.

Road to the Weigh-Off

Once the field trips have subsided and pumpkins are large enough to go to competition, the fun of loading begins!

If a pumpkin is heavy enough, it must be lifted into the bed of a truck using a strategically constructed tripod to balance the plant and ensure that it makes it into the truck safely without damaging the precious fruit. The tripod is made of 16-foot 4x4 pieces of wood and must be tall enough to back up a truck under it.

By using a lifting ring and ropes to create a net for the pumpkin, it’s easy enough for even TJ to lift pumpkins that are hundreds of pounds into the bed of the truck. 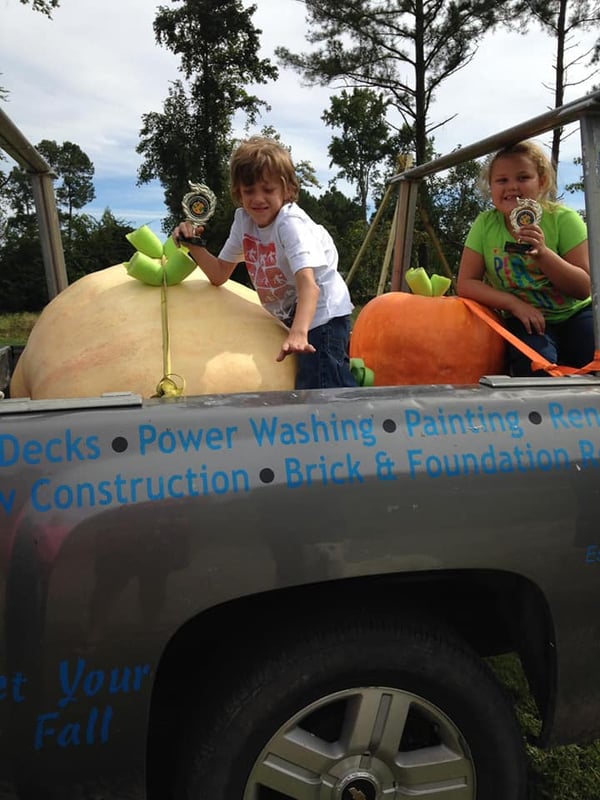 TJ and Marina show off their pumpkin awards during the winning 2013 growing season.

However, the real adventure ensues once they’re driving down the road.

“Everyone should drive with a giant pumpkin in the back of their truck at least once. It’s the most fun part. People on the road will stare and give you the funniest looks. Some will almost wreck!” 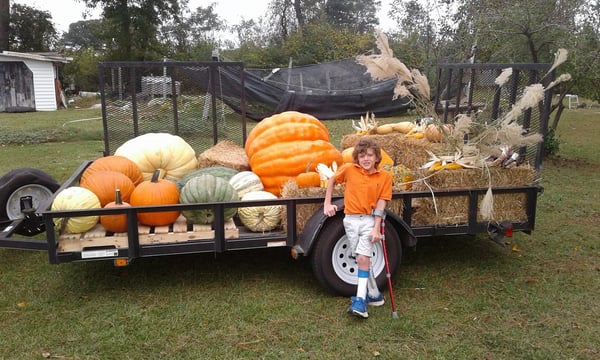 The trailer is loaded down with pumpkins and impresses everyone who passes on the road.

As one of the first folks to get the state giant growing competitions started in North Carolina, Gary and his family are very involved at the state fair. He actually helps weigh pumpkins and watermelons at the fair, a job that, as you can imagine, comes with a lot of pressure.

No matter the results, they enjoy the competition and camaraderie of growing and comparing notes with those around the great state of North Carolina.

You can see the full Facebook Live video of the giant pumpkin weigh-off at the North Carolina State Fair here. View the excitement of the Lovitt family weighing their pumpkins and all the others from 2018.

Thanks to the Lovitt family for welcoming us into their pumpkin patch this year!