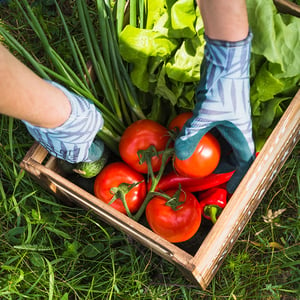 By Amy Whitney, Guest Blogger.
Amy is a long-time volunteer for the Cobb County PAR garden and loves plants, especially the ones she can eat! Amy grows vegetables, fruits, herbs, and flowers in her own yard, and she writes about growing food on her Small Garden News website.

Community gardens are known for donating part of their harvests to food banks, shelters, and soup kitchens. Some gardens have a separate patch devoted to this purpose, and some request that members consider donating part of their own harvests. Gardeners do like to share, and this is an easy way for gardeners to support people who are experiencing hard times.

Not everyone knows, though, that there is a national program, begun by garden writers, that advocates this kind of sharing. The program is called Plant a Row for the Hungry (PAR).

This blog shares details about the history of PAR and how local Master Gardener Volunteers of Cobb County are using Soil3 organic compost in their PAR garden to grow fresh, healthy food to nourish families in their area. If you are inspired to start your own garden and make a donation, you can get a Soil³ garden kit delivered and look for links below to find a nearby pantry for your donation.

A brief history of Plant a Row for the Hungry 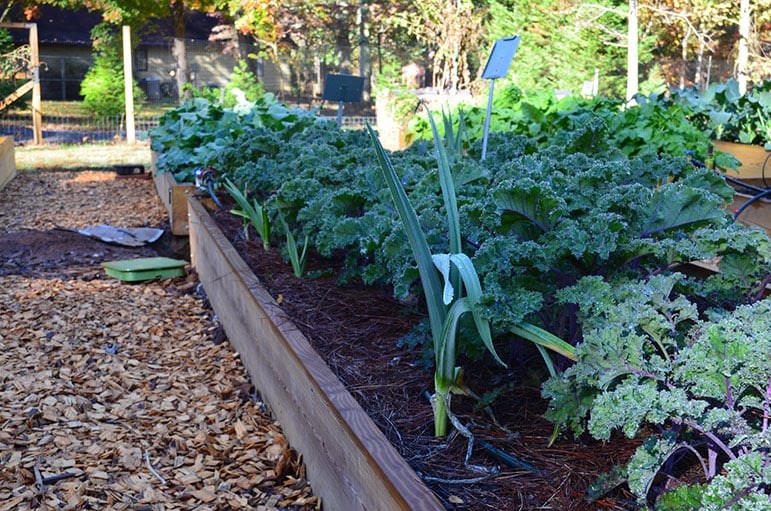 Garlic around the edges leaves plenty of room for an abundant crop of kale. This photo was taken in November.

PAR started in Anchorage, Alaska, when garden columnist Jeff Lowenfels asked readers to plant an extra row of vegetables to donate to the local soup kitchen. Gardeners took up the challenge, and garden-fresh vegetables piled into the kitchen.

Lowenfels, a former president of Garden Communicators International (previously named Garden Writers Association), brought the idea to the group. The program went national in 1995, as garden writers across the country promoted planting extra crops for donation. Since then, gardeners have donated more than 2 million pounds of produce to food banks, soup kitchens, and related charities across the U.S. as part of the program.

A PAR garden in Cobb County

The newest location includes 10 raised beds for PAR and two for the property owner.

Master Gardener Volunteers of Cobb County (MGVOCC) converted its demonstration food-garden to a PAR garden in the late 1990s. The project still serves as a demonstration and teaching garden, but the harvest from the entire garden, not just one row, is donated to local food banks and similar agencies.

The Cobb County PAR garden hasn’t always been in the same location, though, because the MGVOCC does not have a property of its own. In the beginning, the garden was on a county property. When that property was scheduled for development, the gardeners searched for another site where they could continue the project.

The PAR gardeners spent six years each in two different Kennesaw locations. First in a public garden owned by the city of Kennesaw, then on property owned by a small business, sharing space with a local community garden. Eventually, though, both of these properties were also slated for change.

The newest home of the Cobb County PAR garden, where the gardeners relocated last spring, is a private, but large, homeowner property. 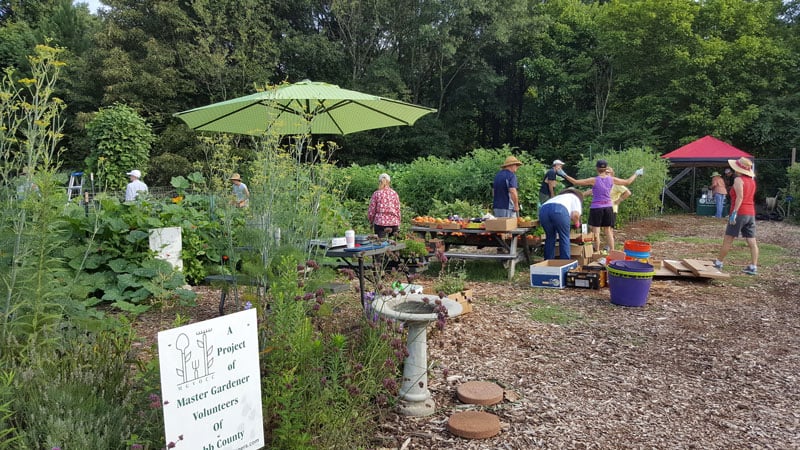 Cobb County PAR garden in its previous location in Kennesaw.

Anyone who has established a garden understands the level of work and commitment involved. Moving a garden is a huge effort! Installing a fence, amending the soil, shaping the beds, and surrounding it all with flowering plants that support pollinators – it all has to be repeated with each move.

The PAR gardeners have been fortunate that in each location, property owners worked with the gardeners to provide, facilitate access to, or share a toolshed, water, and/or a fence. That is an important part of the work! Working with the local soil – dense, red clay – is a challenge that the gardeners have to address on their own.

PAR gardeners topped up the beds with Soil³ in April.

Previously the Cobb County PAR garden beds were in the ground. After the most recent move, the gardeners decided to build raised beds and fill them with Soil³ organic humus compost. The main reason for this decision was to expedite the garden fertility. With each of the earlier moves it would take the two to three years to bring the red clay soil in the gardens to a high level of productivity. The goal was to avoid a long period of lower food donations.

PAR gardeners had used Soil3 compost to amend the red clay soil at the previous location, and the gardeners found that the amendments helped keep the plants healthy and productive. 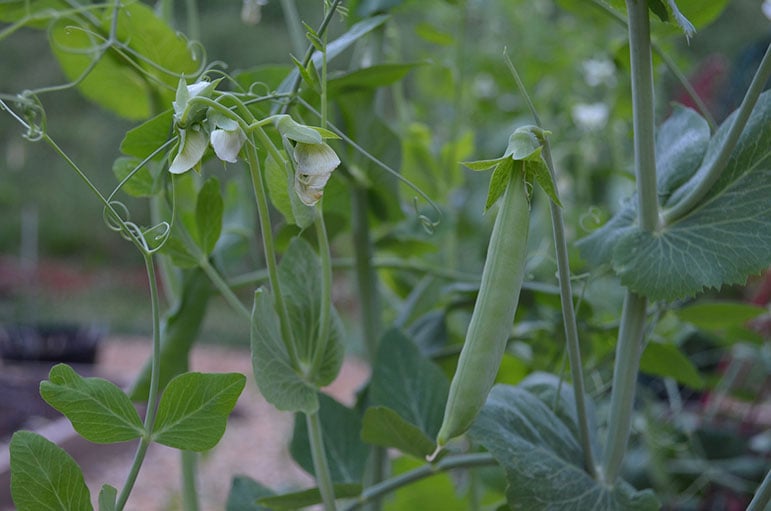 Sugar snap peas don’t add many pounds to the harvest total, but they help bridge the gap between the last of the spring greens and the first summer vegetables.

Over the last 13 years, Cobb County PAR gardeners have donated over 14 tons of produce!

In spite of the much smaller size of the new garden space, the Cobb County PAR donated more than 900 pounds of produce last year. This is mostly from just four beds totaling 192 square feet at the start of the summer, with an addition of two beds for 96 more square feet of growing space partway through the first growing season.

The previous two gardens were much larger, which meant the PAR food donations were also larger. Donations averaged 2,300 pounds per year for the past 12 years. The hope is that this year, with 10 beds totaling 480 square feet of growing space, the new PAR garden will come closer to the old average.

Any gardener can participate 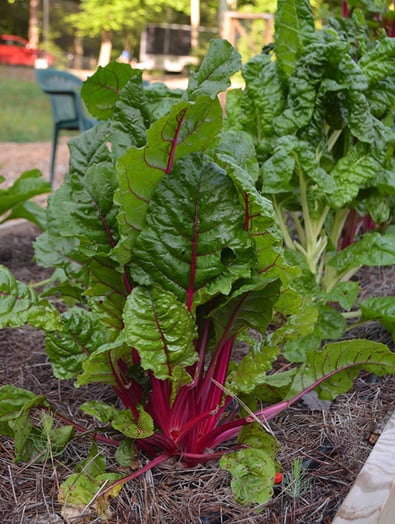 Swiss chard provided healthy greens all winter; the last of the crop was pulled in early May.

Most of us appreciate the benefits, in flavor and in building good-health, that fresh vegetables and fruits can provide. Sharing those benefits is as natural as breathing for many gardeners. They bring the overflow from abundant harvests to neighbors, to church, to the office. This sharing is not included in any official tally, but it is still important.

For gardeners who want to participate in the national PAR project, finding a food bank or shelter that accepts donations of fresh produce might be the hardest part. Not all facilities have coolers on site to keep harvested food in good condition, and some accept food donations only one or two days each month.

Gardeners in the metro-Atlanta area can get help locating a donation site from the Atlanta Community Food Bank (ACFB). This organization maintains a list of partner agencies that accept donations of garden produce. These partners add up the pounds of donated produce they receive, and then report the total back to ACFB. Last year, according to ACFB’s website, metro-area gardeners donated more than 100,000 pounds of fruits and vegetables through the PAR program.

Gardeners who want to include their donations in the metro-area total can find the list of participating agencies on the ACFB website, on the community gardens page, using the “Plant A Row” link at the bottom of that page. 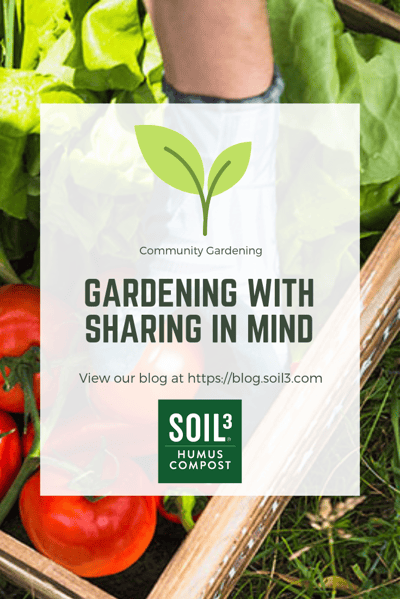 Smart Plant Placement: Get the Most out of Your Raised Bed Garden

Celebrating the Soil Beneath Our Feet, Guest Blog by Amy Hudson

Gardening Stories from the Super-Sod Team

How to Start a School Garden on a Tight Budget