Growing Cover Crops to Protect and Rejuvenate the Garden

Joe Lamp'l
Joe Lamp’l is the Creator, Host and Executive Producer of the Emmy-award-winning national PBS series, Growing a Greener World®, Founder of joegardener.com, and creator of The joegardener Show podcast, and the joegardener Online Gardening Academy™. He is also the previous host of Fresh from the Garden on DIY Network, as well as on-air contributor to The Today Show, Good Morning America and The Weather Channel.
November 19, 2020 3 minute read 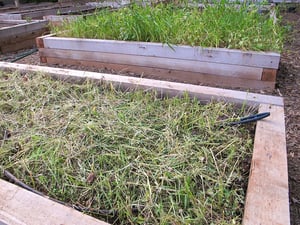 When your garden is resting between growing seasons, you can protect and improve the soil by planting cover crops, also known as green manure.

Cover crops provide aeration and fertility while stopping weeds from taking hold — and the benefits don’t end there.

Soil that is left bare may bake in the sun and become impermeable or, in wet conditions, stormwater run-off will carry away the valuable topsoil. Rain droplets also hammer away at uncovered soil, leading to compaction. A cover crop can address and correct all of these issues.

Cover crops benefit soil both while they are growing and long after.

One of the top reasons to grow cover crops is to refresh soil that’s been depleted of nutrients. When cover crops are turned in, they improve soil health and fertility by adding organic material as well as nitrogen and a variety of micronutrients.

The roots of cover crops prevent erosion and reduce compaction, and their presence encourages more beneficial microbes in the soil. Meanwhile, the foliage slows down the movement of water so it percolates into the ground slowly instead of running off. Foliage also blocks the sun from baking the soil surface and denies weeds the sunlight they need to germinate and grow.

Choosing Cover Crops for Your Garden

There are many types of cover crops to choose from —and all will protect the soil surface — but some varieties are specialists when it comes to providing certain additional benefits. Pick the cover crop best suited to address your garden’s specific needs.

There are three main categories of cover crop:

For the most soil coverage and the best erosion control, grasses are a great pick. If your soil is low in nutrients, legumes are the way to go. If fertility and erosion are not your biggest concerns, choose broadleaf crops for maximum weed control.

You don’t have to pick just one cover crop. Crops can be mixed together or switched from year to year to increase the variety of benefits to the soil. In fact, when shopping for cover crop seeds you will likely find blends of cover crops that complement each other.

Insider Info: Some cover crops, such as rye, are allelopathic, which means they can inhibit seed germination for many plants. This effect will wane after the turned in grass and roots have decomposed for several weeks.

When to plant cover crops 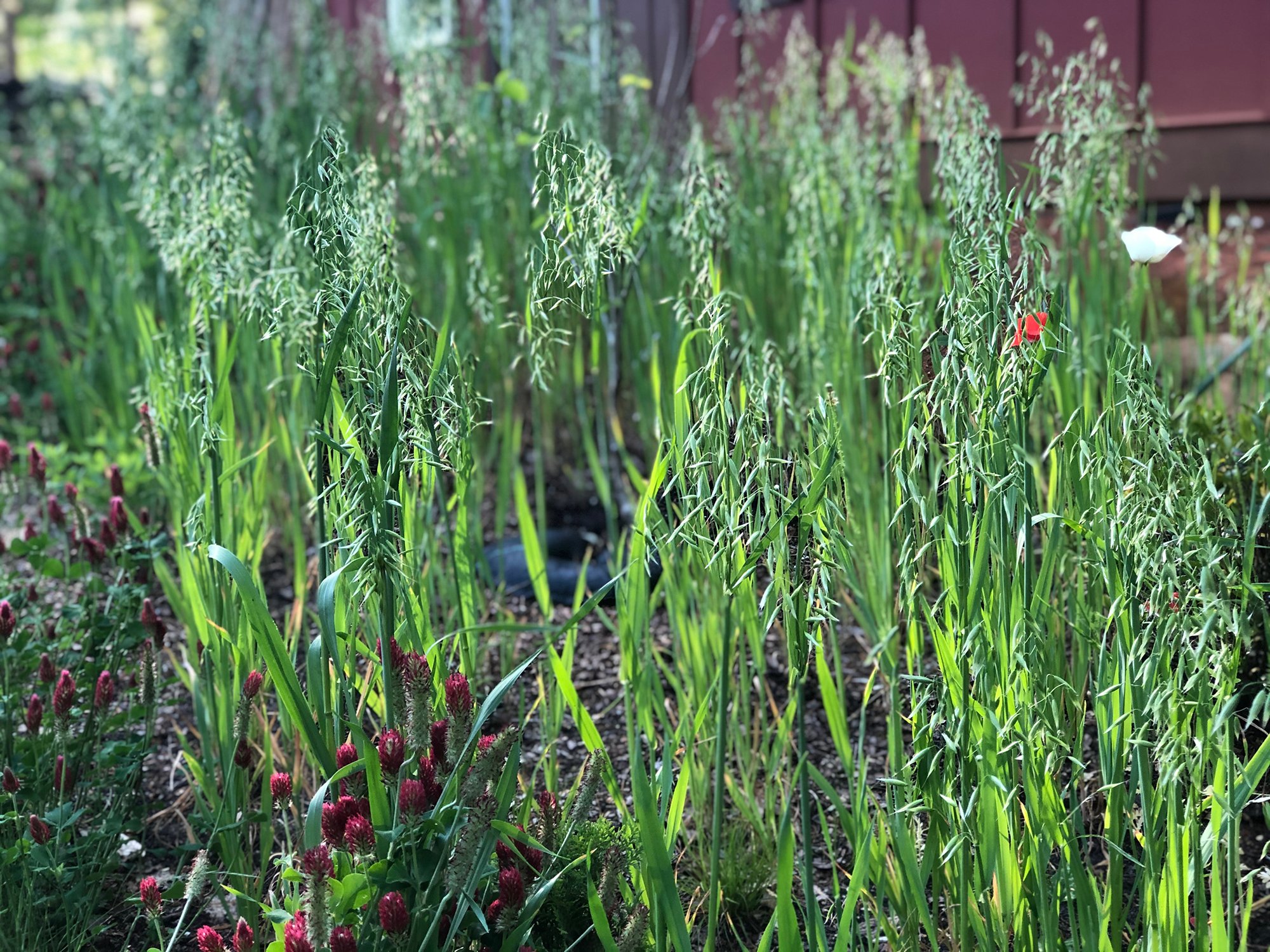 Oats make a beautiful cover crop.
Plant them in the autumn and enjoy the seed heads in the spring.

Cover crops are more common in winter than for summer, thus this shorter list. 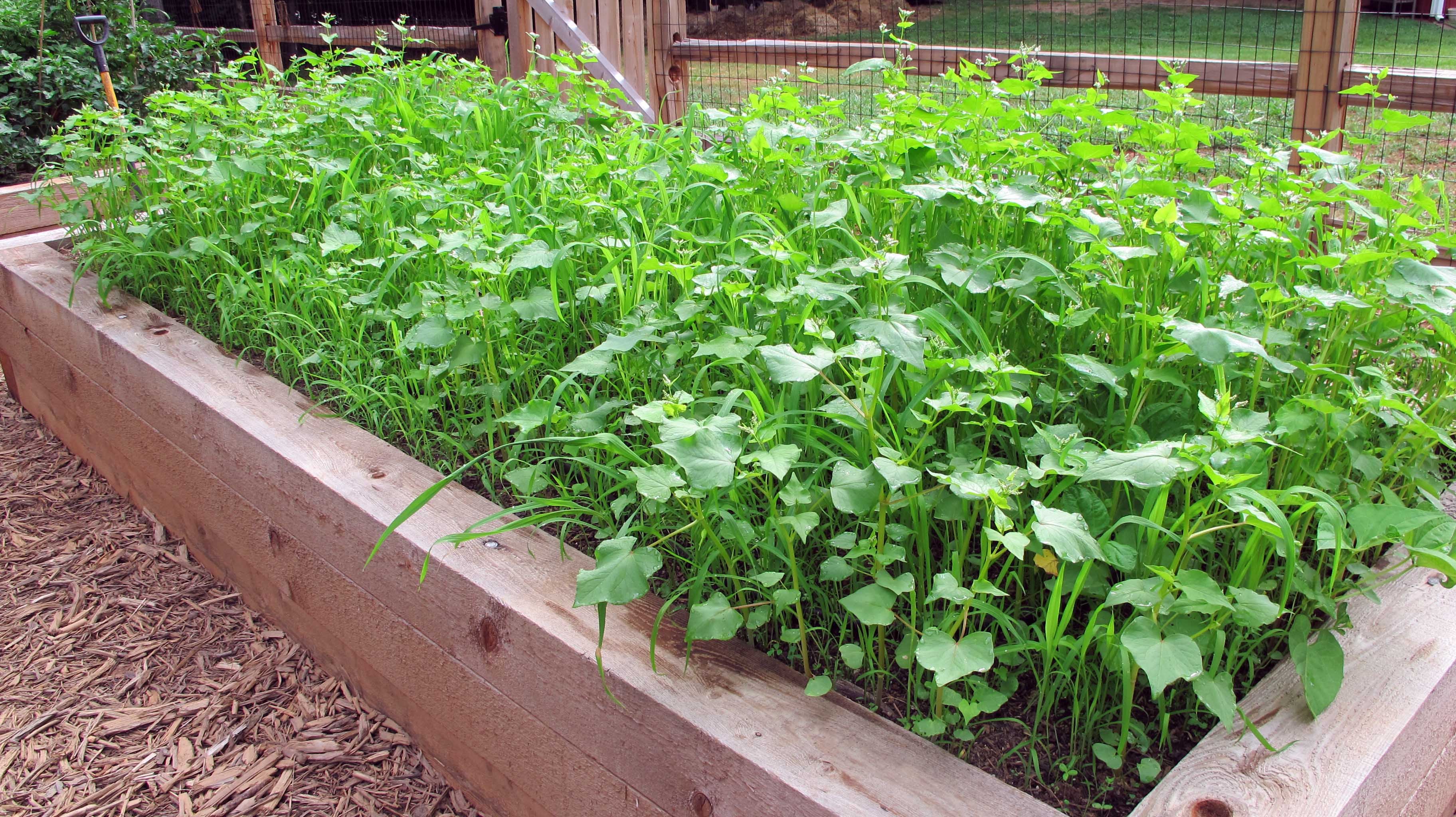 Here's sorghum as a cover crop in a raised bed.

How to Turn In Cover Crops

"Turning in" a cover crop means mixing the crop into the soil it was growing in. 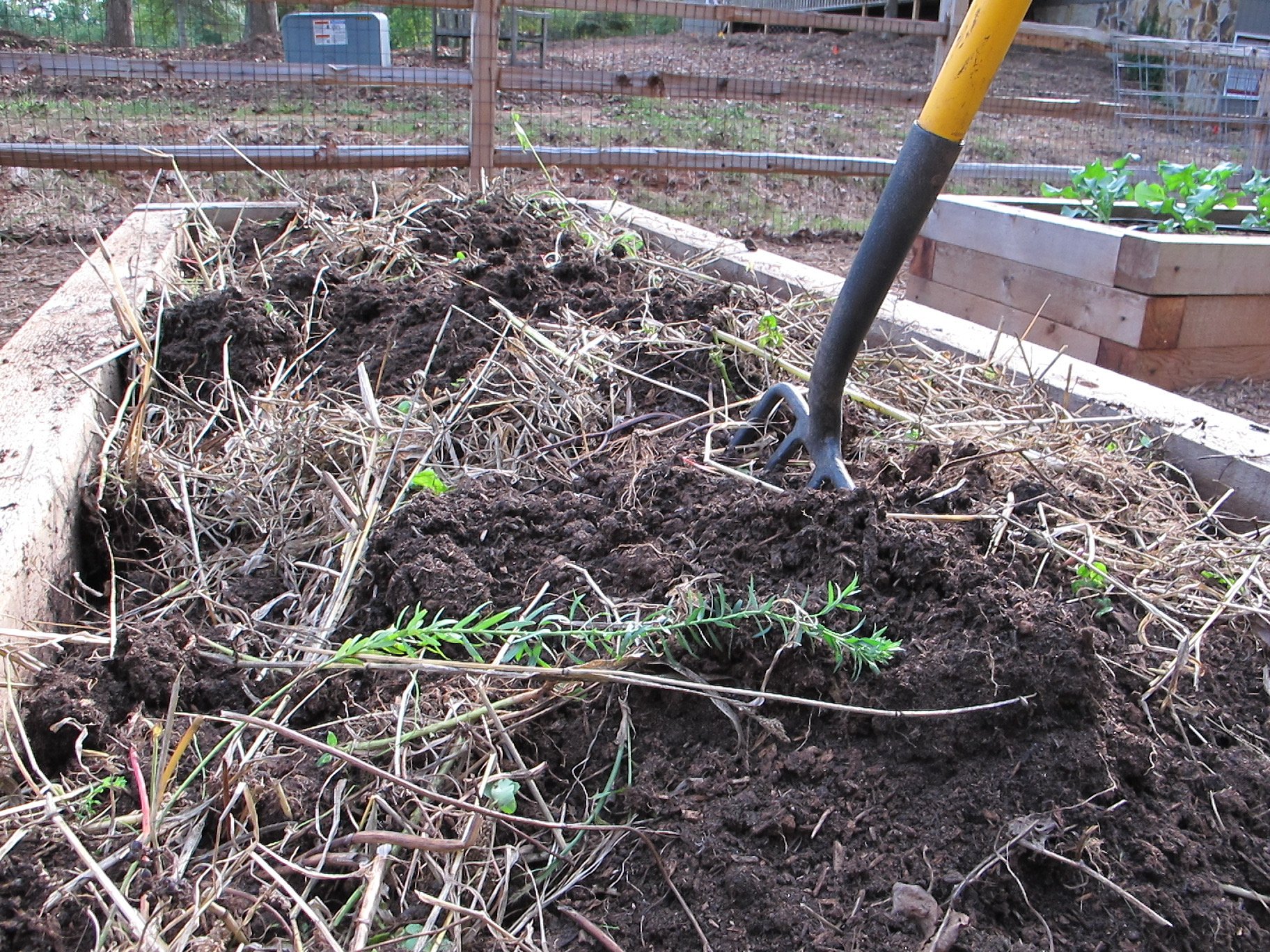 Use a garden fork to turn in your cover crops.

Cover crops can be turned in whenever you need to prepare a planting bed to grow vegetables, but the best time to turn in is after the plants begin to form flowers but before they set seed. At this point, nutrient storage is at its peak.

First, cut the plants down to the soil level. With a garden fork, turn the foliage and roots several inches down in the soil. Just don’t go too far down, as deep tilling will disrupt the soil food web and proper drainage.

Turning in cover crops can be a lot of work, so be prepared for a fight. Cereal grasses, with their deep, tough roots, are particularly challenging.

When turning in cover crops, it is also a great time to amend your garden soil with additional organic matter, such as Soil³ humus compost. Work both the compost and the cover crop foliage and roots into the garden a few inches deep — your plants will be happy you did.

After turning in a cover crop, wait two to four weeks before sowing seeds or transplanting there. In that time, microbes in the soil will digest the cover crop’s organic matter and release the nutrients. If you sow seeds immediately after turning in, those active microbes may also digest the seeds you just planted.

If you don’t want to wait two to four weeks to plant a new crop, you can cut the cover crop and remove and compost the foliage, then turn in only the roots. That way, the digesting process will finish in less time. 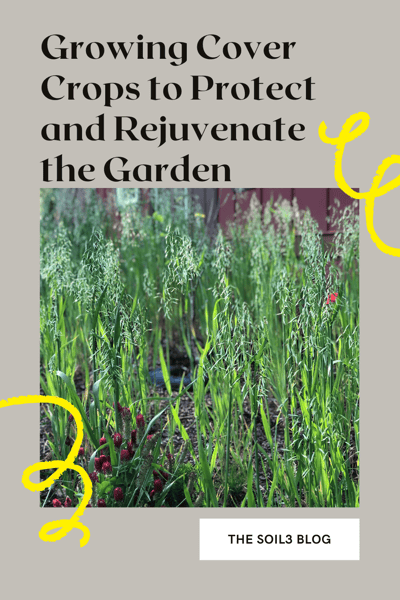 Foodscaping Simplified - How To Plant an Edible Bed Edge