Brie Arthur
Brie Arthur is a Soil³ team member and author of "The Foodscape Revolution" and "Gardening With Grains." With a background in ornamental plant production, Brie is revolutionizing the backyard gardening movement by her work across the US and the globe promoting sustainability and community gardening in urban Foodscapes. Brie's website: https://www.briegrows.com/
June 1, 2022 6 minute read 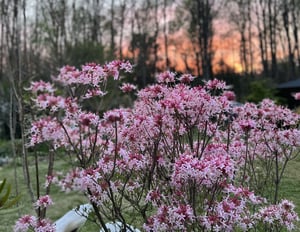 Azaleas are a southern staple, ushering in spring with masses of colorful blooms. Of course, most of the commonly grown azaleas are Asian in origin, but did you know that there are a wide variety of NATIVE azaleas?

There are seventeen species of North American native, deciduous azaleas, which technically fall into the genus Rhododendron. These plants offer modest maintenance needs and high impact, fragrant blossoms that attract beneficial pollinators, including butterflies and bees! From dry shade to near swamp conditions, there is a native azalea that will thrive in the natural conditions of your home garden.

Reminiscent of honeysuckle blooms, native azalea flowers are trumpet shaped and fragrant. This Rhododendron canescens 'Varnadoes Phlox Pink’ puts on an amazing display in my garden early each spring before its leaves appear.

Just like their popular Asian cousins, native azaleas prefer to grow in acidic, moist, well-drained soil. Often considered best for woodland environments, these spring bloomers can tolerate a considerable amount of shade. Morning sun is commonly recommended, but they bloom much more abundantly with brighter exposure. In fact, I grow ‘Varnadoes Phlox Pink’ pinxter azalea, R. cansescens in FULL west facing sun and it has thrived with supplemental water through many summers.

I have been growing a wide selection of cultivars in my garden for more than a decade. All are growing in a combination of my native sandy soil, mixed with ½ Soil³ compost and ½ ground, aged pine bark.

Each fall I top dress with 1-2” of Soil³ compost and then mulch with pine bark to ensure the pH remains acidic. Every spring I am rewarded with beautiful, fragrant blossoms!

How big do they get? That is hard to summarize with so much diversity but count on most species growing to about six foot tall and wide in ten years. There are exceptions that grow smaller, such as the swamp white azalea R. viscosum that is under three foot tall and wide after ten years in my garden. In contrast, the flame azalea, R. calendulaceum, can easily reach over ten feet high.

As with all azaleas, knowing when to prune is important because you don't want to inadvertently prune off the next season's flowers. The easiest solution is to do tip pruning shortly after the plant has flowered. With native, deciduous azaleas that would mean pruning in the late spring and early summer depending on the species and variety. This will ensure the plant has the full growing season to establish and you won't miss out on flowers the following year. 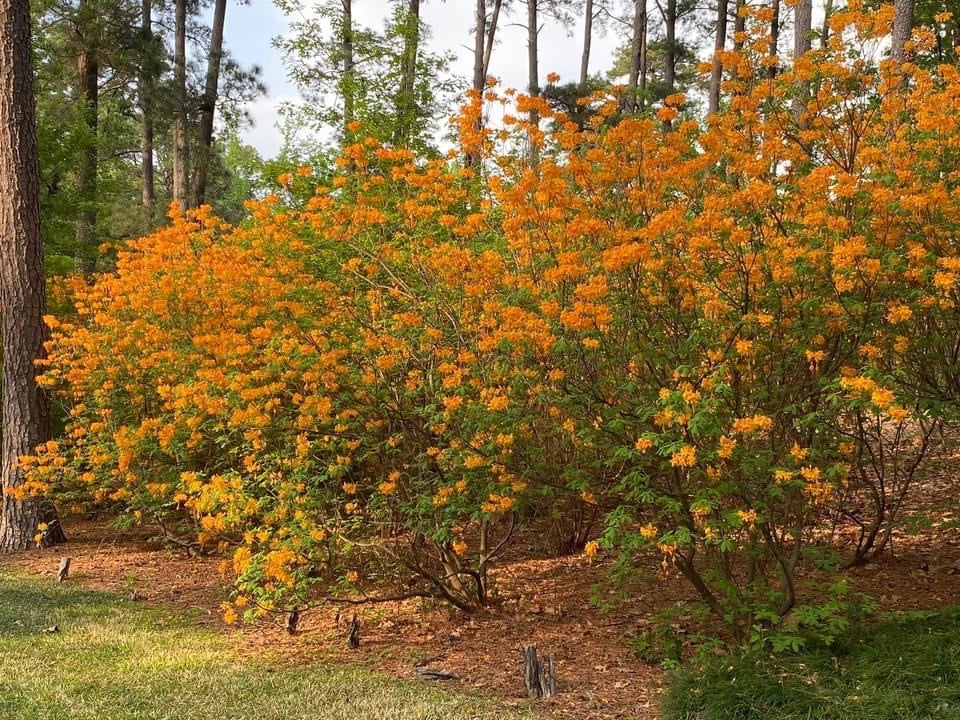 You can see why R. calendulaceum is commonly called “flame azalea.” This sloped planting of several shrubs looks like it is on fire!

However, if you have large, overgrown deciduous azaleas, you can do a hard cut back, or rejuvenation pruning in early spring, when the plant is flushing new growth. This approach is dramatic and generally unnecessary for these native shrubs. The best advice about pruning starts with appropriate plant placement. Before you plant, think about the realistic mature size - at least 6' tall and wide at a minimum. Don't plant these shrubs in an area where you will be trying to keep them tiny, that defeats the purpose of growing them.

In general native azaleas have very few pests to worry about, unlike their evergreen cousins who suffer from terrible lace bug infestations. One of the many advantages of growing these native species is the simple fact that they lose their leaves, meaning any foliage based pests are short lived. I have never treated a native azalea for a pest problem because my plants have never had any issues. If you do see problem bugs such as scale or spider mites, apply horticultural oil which will smother the insects. This is a non-toxic pesticide alternative that is very effective for any plants in your landscape. 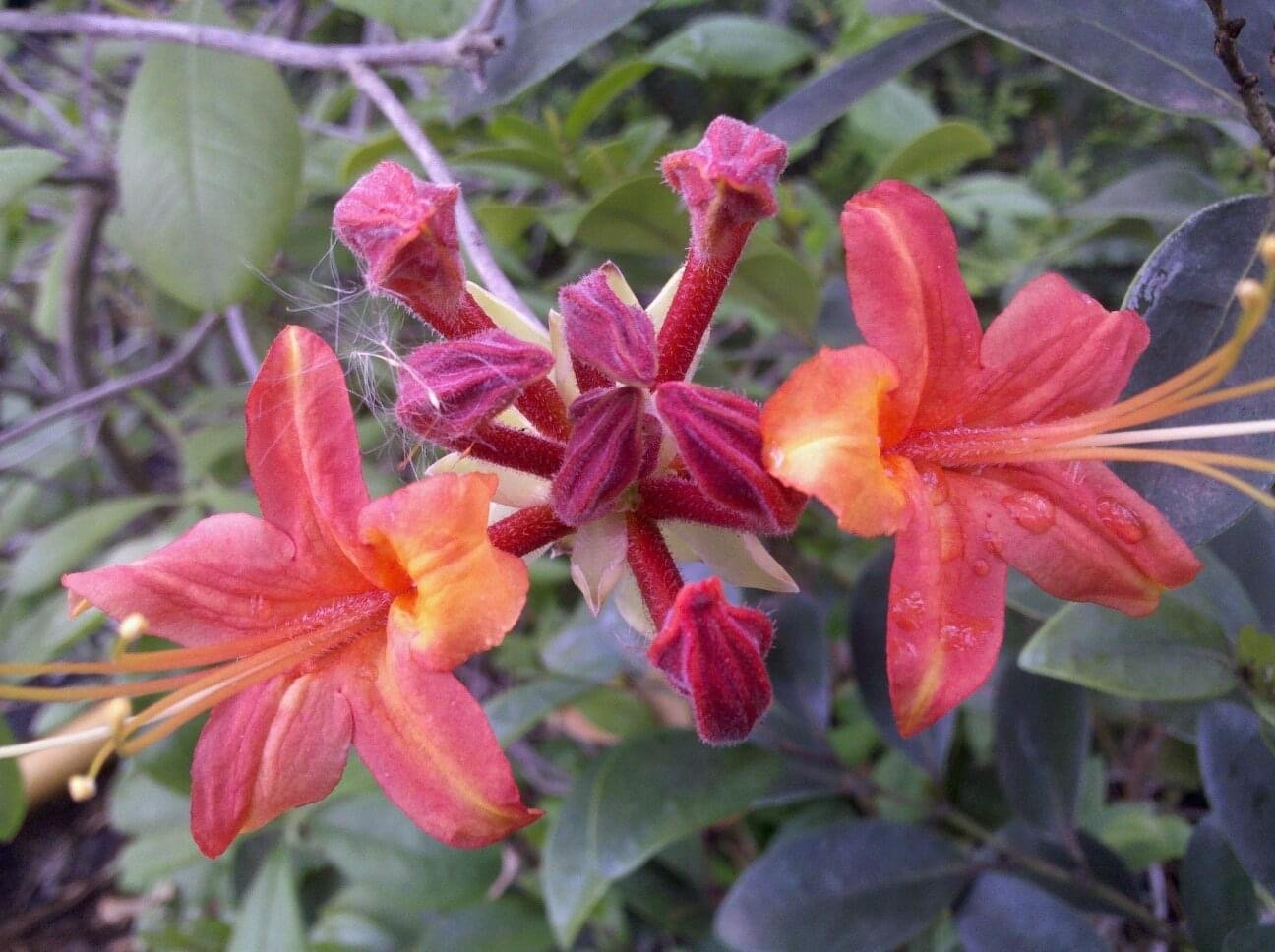 Red Pepper is an Aromi deciduous hybrid with red-orange flowers. Dr. Gene Aromi from University of South Alabama crossed native azaleas with other varieties to breed heat tolerant, disease resistant hybrids with larger flowers that have vivid color and fragrance.

Native azaleas are divided into three groups based on flower color: white, orange, and pink.

There are six species native to the eastern US that make up the white flowering category, two of which have only recently been identified and propagated. The white flowering forms offer fragrant blooms from early spring through summer! 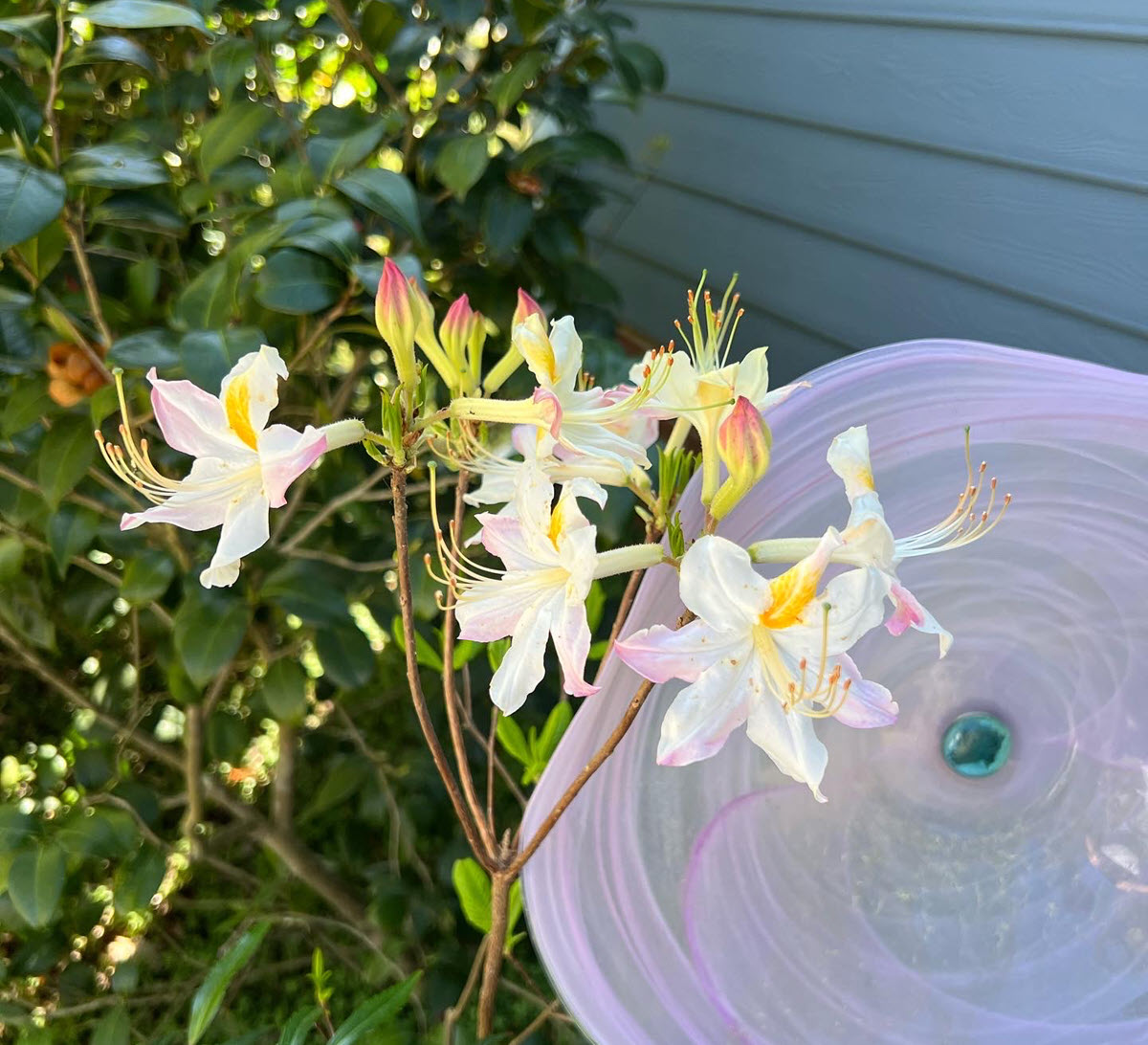 'High Tide' has large white flowers with a golden marking on the top petal and pink highlights. It's another heat tolerant Aromi hybrid with a spicy-sweet fragrance.

Want a brilliant shot of color? Look for species in the orange/red group, which includes five species native to the southeast. The flowers range from shades of yellow and deep orange to scarlet.

The Pink Group has long been a favorite of mine. These species all bloom in early spring before the foliage emerges with flower from pale pink, deep rose, to almost cherry red.

It is critical to not disturb plants growing naturally and protect the native habitat. Instead of collecting from the wild, support nurseries that produce these beautiful native shrubs and ask for them at your local garden centers. No one grows them better than Carolina Native Nurseries who have been growing a wide selection for many years! Check out these great videos to learn more about how they are propagated and grown for commercial sales.

I hope you will be inspired to include native azaleas in your garden. They are certainly a plant that I enjoy cultivating and plan to include in my new native foodscape garden that I will soon break ground on!

Photos by Brie unless otherwise noted. 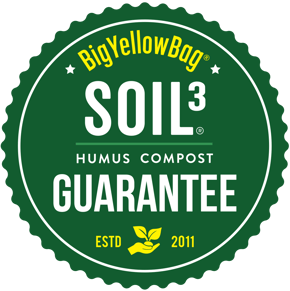